COBOL — The Hottest Programming Language Out There

Do you wanna be a software engineer?

Do you wanna work with one of the most in-demand and bleeding-edge technologies out there?

Do you wanna create lots of POSITIVE IMPACT and SOCIAL CHANGE?

Do you wanna live life in the fast lane?

Well, I got the language for you if you wanna dance like it's 1959 again. Introducing COBOL, the language that makes C look like child's play.

COBOL, or Common Business-Oriented Language, is a highly-verbose compiled language designed to run on mainframes powered by operating systems like z/OS from IBM. Designed in 1959, it was heavily inspired by the FLOW-MATIC language designed by Grace Hopper which features the same imperative and verbose syntax. The sole purpose of the language is to handle massive amounts of throughput in industries including airline ticketing, insurance claims, banking, and unemployment claims.

So you might be wondering, why are we relying on such an old language to process business-critical transactions that affect millions of people? It is certainly not popular as indicated by its low ranking in the TIOBE Index and with the advent of new/established languages such as Java, Python, and Go, new programmers have little reason to explore the world of COBOL.

The interest to upgrade and change is there, but businesses that rely on COBOL are stuck between a rock and a hard place. First, the cost of replacing all of the existing infrastructure and code base with a newer language can be very time consuming and costly. In 2012, the Commonwealth Bank of Australia took on this herculian task to transition its systems from COBOL to SAP ABAP. In total, the update took 5 whole years, 1 billion Australian dollars (USD 749 million), and the assistance of 2 other companies (Accenture and SAP). Upgrading isn't impossible, it's just extremely costly.

According to Reuters, it seems that COBOL won't be going anywhere anytime soon. Also with the lack of COBOL developers to help with the migration, it looks like these systems would be here to stay for years to come. With the Coronavirus outbreak, the lack is more apparent than ever as unemployment processing systems in New Jersey were failing under the spike in unemployment claims. It's not that the system was failing its job, but the changing environment has made it inadequate.

"We have systems that are 40-plus years old. There’ll be lots of postmortems, and one of them will be how the heck did we get here?, when we literally needed COBOL programmers." - Gov. Murphy of New Jersey

When I first heard him say this on the news, I thought it was a joke. I initially thought that a majority of our systems would've at least been upgraded to something newer, but I guess I was just uninformed.

If COBOL is trending on Twitter, then you know it's serious.

Now that I've got you on board, time to teach you to become a full-fledge COBOL developer. So now, we will start with the most important step to becoming a COBOL developer, writing "hello world".

But before that, we need to do a couple of things to get it up and running on your machine. For this guide, I will be using Ubuntu. This should work the same on the Windows WSL with Ubuntu.

First, we need to install a COBOL compiler. For this, we will be installing open-cobol.

Now, we can begin writing our program. If you were to ask me what the program structure looks like, it is a cross of MIPS Assembly and FORTRAN.

Open a new file in any editor and call it hello.cob. *.cob or *.cbl are file extensions for Cobol source files.

You may have noticed a couple of things about the code itself. The first 6 digits are reserved for line numbers that increment 100 per line. Comments are defined with *>. Each program statement ends with a period, much like the English.

To compile this program, simply use cobc:

The compiler should generate an executable file that you can simply execute with:

And there you have it, your first Cobol program!

Aspects of the Language

This will be a quick overview of different aspects of the programming language. If you're interested, I recommend taking a look at the references I used to understand the language. Surprisingly, the documentation isn't too bad.

Variables are pretty unique in COBOL. Instead of defining a type, it seems you specify what the variables hold as a composite of different types:

For example, a floating-point number with 3 digits and 2 digits of precision would look something like this:

Note that a value does not need to be specified for the variable. The best way I can sum up variable declaration is that we use the different symbols to represent the structure of the value that will be stored, much like how regex can be used to match different words/expressions.

The numbers appearing on the left-hand side specify the level of the variable for nesting data just like how classes/struct can be used to wrap around other variables.

This is a very brief overview of variables, but I highly recommend looking at documentation from IBM to learn more.

Conditionals are quite self-explanatory given how it reads like plain English barring a couple of symbols.

For switch statements, we specify the value to switch on (statement in Java) to be True.

Conditionals can also be combined with NOT, AND, OR, and some others.

For further reference, there is a lot written about how to implement conditionals.

There are a lot of other aspects of the language not shown here such as commands, strings, loops, file I/O, etc.

Now for the important question.

Can COBOL be used for Leetcode? Absolutely. Allow me to demonstrate.

For today's problem, we will be doing Leetcode 326. Given an integer, write a function to determine if it is a power of three. And for the follow-up, could you do it without using any loop / recursion?

For the solution below, we will accomplish both. The first solution that comes to keep dividing the given number, n, by 3 and see if the remainder is 0 at the end. However, that did not fit in with the follow-up and I got too tired to figure out how to write a loop, so we will use the change of base formula instead. 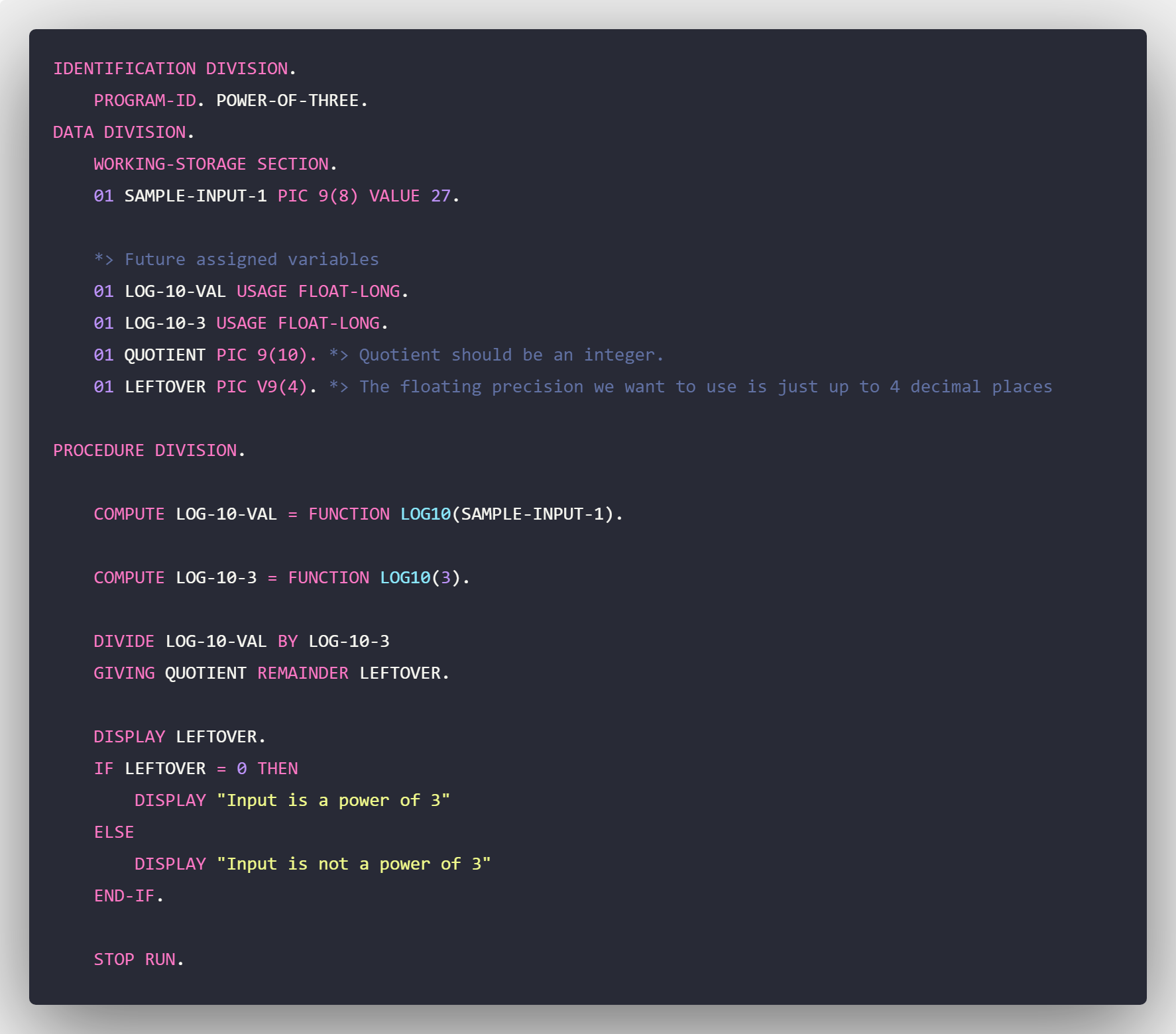 I seriously hope they never ask Leetcode questions in COBOL. Ever.